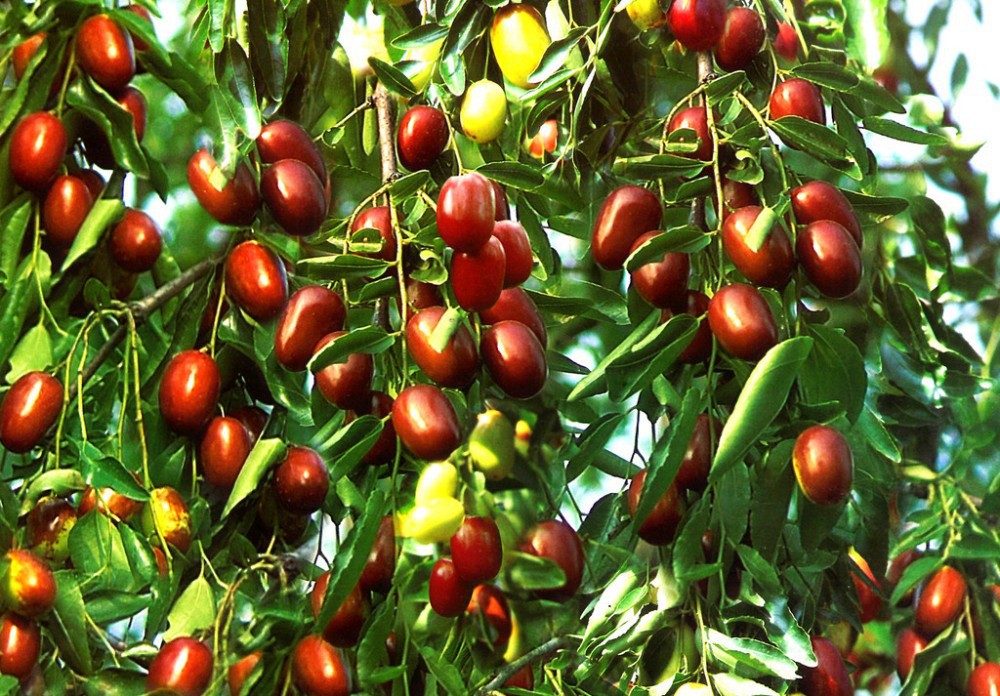 Jujube, the dark red fruit known as Chinese date, is a popular snack and a very nutritious and therapeutic food praised in classics of herbal medicine.

The plant is a small deciduous tree or shrub reaching a height of 5–12 metres (16–39 ft), usually with thorny branches. The edible grape-to-strawberry-sized oval fruits are green when immature, turn dark red to purple-black and wrinkle when ripe, and contain a single hard large seed in the center. This makes them drupes.

Due to extensive cultivation, jujube precise natural distribution is uncertain. It is thought to be originated in southern Asia, between Lebanon, Iran, Pakistan, India, Bangladesh, Nepal, the Korean peninsula, southern and central China, and also southeastern Europe, though more likely introduced there. Chinese date has been introduced in Madagascar.

In the eastern part of Bulgaria Chinese date is known as the “hinap” or “finab”. In the eastern Caribbean the trees grow wild, and are reported to exist in Jamaica and Trinidad as well. It is also known as “pomme surete” on the French islands of the Caribbean. In Antigua and Barbuda, the fruit is called “dumps or “dums”. This fruit, more precisely known as “Indian jujube” elsewhere, is different from the “jujube” fruit that is cultivated in various parts of southern California.

Jujube trees are extremely hardy and can tolerate a wide range of temperatures and rainfall, though it requires hot summers and sufficient water for acceptable fruiting.

Ziziphus jujuba has been cultivated in China for more than 4,000 years. There are at least 400 jujube varieties, successfully developed for their distinctive characteristics – some varieties best for eating fresh and others for drying to attain a chewy, date-like consistency.

The plants traveled beyond Asia centuries ago and today are grown to some extent in Russia, northern Africa, southern Europe, the Middle East and the southwestern United States. Jujube seedlings, inferior to the Chinese cultivars, were introduced into Europe at the beginning of the Christian era and carried to the U. S. in 1837.

In Xizhou Dynasty (1046 BC-771 BC), Chinese people began to use red dates to brew liquor, known as hongzaojiu, which would be served on special occasions and to distinguished guests.

Legends in some Asian countries say that jujube trees were closely watched because their sweet smell had the reputation of making people fall in love. In the Himalaya and Karakoram regions, boys take a stem of sweet-smelling jujube flowers with them or put it on their hats to attract girls.

In the traditional Chinese wedding ceremony, the jujube was often placed in the newlyweds’ bedroom as a good luck charm for fertility.

In Madagascar, jujube trees are a good wood for charcoal, the second main source of cooking energy.

In Bhutan, the leaves of jujube trees are used to keep bugs and other insects out of the house and free of infestation. They are also used as a potpourri to help keep homes smelling fresh and clean.

In Korea, the wood of jujube trees is used to make the body of the taepyeongso, a double-reed wind instrument. The wood is also used to make Go bowls, beads, and violin parts. 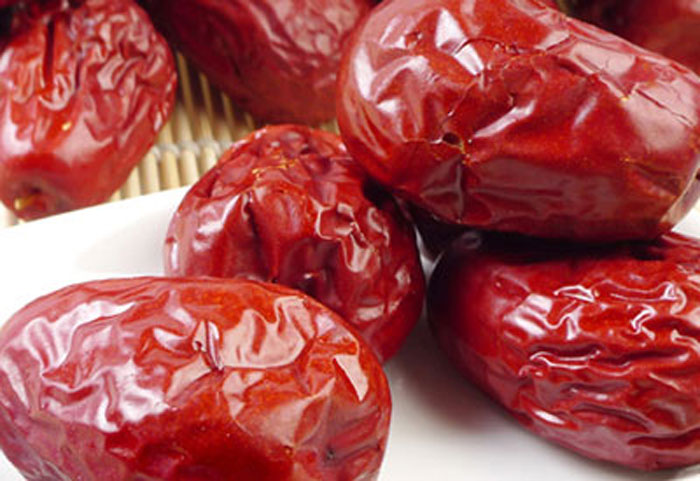 You can get red dates fresh during the autumn, when they’re crisp and green as apples, or dried, when the fruit take on a deep red color and sweet, chewy texture.

The best fresh jujube varieties are Sugar Cane, Li, Sherwood, Chico, and Honey Jar (the latter reportedly the smallest and juiciest). The best drying varieties are Lang and Shanxi Li.

Dried jujube varieties can be used to substitute dates or apples in recipes. Just peel the fruit and remove the single seed inside. Jujubes can also be pickled whole or used to make tea.

The fruit has a thin, edible skin surrounding whitish flesh of sweet, agreeable flavor. The immature fruit is green in color, but as it ripens it goes through a yellow-green stage with mahogany-colored spots appearing on the skin as the fruit ripens further. The fully mature fruit is entirely red, when it begins to soften and wrinkle. The fruit can be eaten after it becomes wrinkled, but most people prefer them during the interval between the yellow-green stage and the full red stage. At this stage the flesh is crisp and sweet, reminiscent of an apple.

The freshly harvested as well as the candied dried fruit are often eaten as a snack, or with coffee. The dried fruit is used in desserts, marmalades, jams, honey, syrups, juices, vinegar and teas.

Smoked jujubes are consumed in Vietnam and are referred to as ‘black jujubes. Both China and Korea produce a sweetened tea syrup containing jujube fruit in glass jars, and canned jujube tea or jujube tea in the form of teabags. To a lesser extent, jujube fruit is made into juice and jujube vinegar. They are used for making pickles in west Bengal and Bangladesh. In China there is a wine made from jujube fruit, called hong zao jiu. Traditionally in India, the fruit is dried in the sun and the hard nuts are removed. Then, it is pounded with tamarind, red chillies, salt, and jaggery. In some parts of the Indian state of Tamil Nadu, fresh whole ripe fruit is crushed with the above ingredients and dried under the sun to make cakes called “ilanthai vadai” or “regi vadiyalu”.

Bring ingredients mentioned above to a boil then set aside to cool.

Mix these together and add to the previously prepared mixture. Bake at 325° F 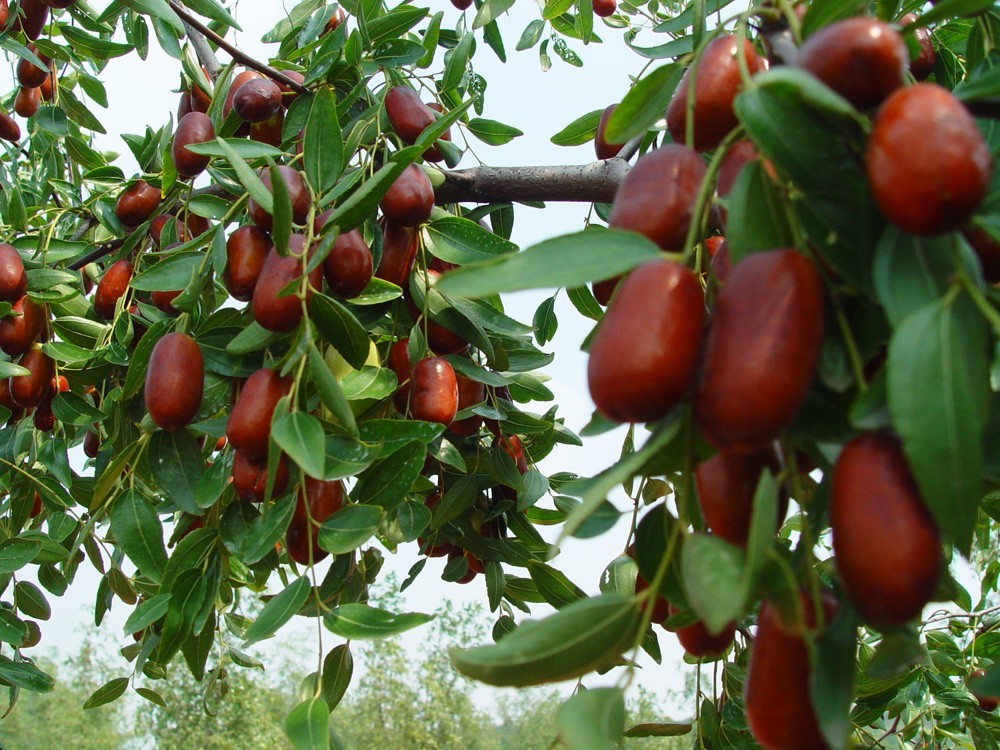 Red dates have been used medicinally for millennia by many cultures. One of its most popular uses is as a tea for a sore throat. Three jujubes a day keep the doctor away and keep you young, the saying goes.

In the legend “Journey to the West,” an ailing king one day encounters the god of longevity in a forest and asks him for the secret of life. The god says he didn’t bring medicine along since he was trying to find his lost horse, but he gave the king three jujubes that he had been planning to give to the god of heaven. The king ate the three jujubes and felt instantly invigorated.

Though Chinese dates are actually classified as drupes (a category of pitted fruit that also includes mangoes, olives and coffee), in Chinese they’ve been labeled as “the king of nuts” for their rich nutritional value. Seventy to 80 times higher in Vitamin C than grapes and apples, red dates also abound with Vitamin A, Vitamin B1, Vitamin B2, protein, calcium, phosphorus, iron and magnesium. This vitamin-packed punch makes red dates great for people who are recovering from serious diseases.

Chinese dates are said to stimulate the production of white blood cells, which improves immunity, and decrease the levels of cholesterol in the bloodstream, which helps protect the liver. Like acai berries and other antioxidant foods, they’re even believed to suppress cancer cells.

Red dates are especially popular with women for their alleged beauty and health effects. Because they’re renowned for enriching and replenishing blood, many women eat red dates during their special time of the month.

Because of their high levels of Vitamin C, dates convert excessive cholesterol into bile acid, which helps prevent gallstones. Meanwhile, phosphorus and iron play an important role in preventing osteoporosis and anemia.

A controlled clinical trial found the fruit helpful for chronic constipation. In another clinical trial, Zizyphus jujuba was proved to be effective against neonatal jaundice.

In Persian traditional medicine it is used in combination with other herbal medicines to treat colds, flu and coughing.

Warnings: While it’s healthy to eat a few red dates every day, like all dried fruits, they should be eaten in moderation to avoid bloating. Three to five are usually enough for one day. Diabetics, however, and people with digestive problems should avoid red dates.