Silene Vulgaris Or The Bladder Campion 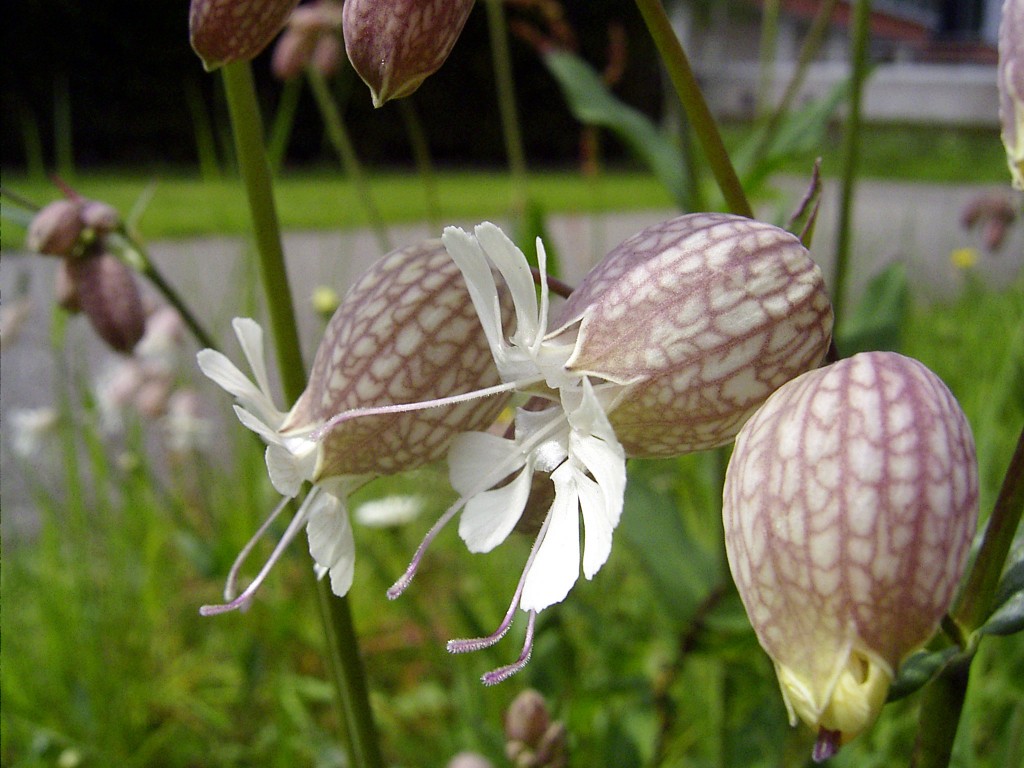 Silene vulgaris, common names are the bladder campion or maidenstears, is a perennial plant species of the genus Silene of the pink family (Caryophyllaceae).

Silene vulgaris is widespread in the Mediterranean region, most parts of Europe, where in some parts it is eaten, Macaronesia, Asia (to Siberia, the Russian Far East (west and east Siberia, Sakhalin, the Kamtschatka Peninsula), China, India (Kashmir) and Nepal), and North Africa. It is also widespread in North America where it is considered a weed.

Silene vulgaris is growing up to 0.6 m (2ft) and has waxy grey-green foliage. The flowers consist of five cleft petals, which form a tube, surrounded by a bladder-like calyx, hence the common name of Bladder campion. Flowering occurs from May to August. The flowers are open all day and pollinated by Lepidoptera, and bees, but their clove-like scent is only emitted in the evening attracting long tongued moths. The striking black and red froghopper (Cercopis vulnerata) can often be found on the Bladder campion. Silene vulgaris flowers are dioecious, which means that individual flowers are either male or female, but only one sex is to be found on any one plant, so both male and female plants must be grown if seed is required.
The fruit is dry and splits open when ripe.

Growing information: Silene vulgaris is easily grown from seed. Sow early spring in a cold frame. When they are large enough, prick the seedlings out into individual pots and plant them out in the summer. It is possible to sow seeds outdoor if you have sufficient seeds.

Edible uses: Young shoots and leaves may be used as food in some countries of the Mediterranean region. The tender young leaves are sweet and may be eaten raw in salads. The cooked young shoots, harvested when about 5cm long, have a flavour similar to green peas but with a slight bitterness. This bitterness can be reduced by blanching the shoots. The older leaves are usually eaten boiled or fried, sauteed with garlic as well as in omelettes. The leaves should be used before the plant starts to flower.

In Crete it is called Agriopapoula and the locals eat its leaves and tender shoots browned in olive oil.

In Cyprus it is called Tsakrostoukkia and Strouthouthkia and it is very widely eaten over there. Even since some years, the plant come back into being cultivated and sold in shops.

In Italy it is commonly known as sculpit, stridolo, or by the obsolete scientific name Silene inflata, as well as sciopentin in Veneto, scupitin or grisolon, and nenkuz in Friuli. The leaves of this plant may be used also as an ingredient in risotto. It is cooked as spinach, eaten raw in salads or made into ravioli filling with ricotta and parmisan cheese.

In Spain – formerly in La Mancha region of Spain, where Silene vulgaris leaves are valued as a green vegetable, there were people known as “collejeros” who picked these plants and sold them. Silene vulgaris leaves, locally known as “collejas”, were mainly used to prepare gazpacho viudo (widower gazpacho). A widower part of the dish name came from the fact that gazpacho viudo was only eaten when meat was scarce and the leaves were emergency or lean-times food, a substitute for an essential ingredient. Other dishes prepared with these leaves in Spain include “potaje de garbanzos y collejas”, “huevos revueltos con collejas” and “arroz con collejas”.

Toxity: some caution is advised when eating this plant, as although no mention of toxicity has been seen for this species, it does contain saponins. Although toxic, these substances are very poorly absorbed by the body and so tend to pass through without causing harm. They are also broken down by thorough cooking. Saponins are found in many plants, including several that are often used for food, such as certain beans. It is advisable not to eat large quantities of food that contain saponins. Saponins are much more toxic to some creatures, such as fish, and hunting tribes have traditionally put large quantities of them in streams, lakes etc. in order to stupefy or kill the fish.

Medicinal uses: the bladder campion is said to be emollient and is used in baths or as a fumigant. The juice of the plant is used in the treatment of ophthalmia. The decoction roots of Silene vulgaris in milk or water are used as an emetic, general antidote in poisoning, against constipation, intestinal pains, infusion, used externally to treat wounds, scabies, itching and various skin conditions.

Other uses: the root is used as a soap substitute for washing clothes etc. The soap is obtained by simmering the root in hot water.

Do you grow Silene vulgaris (Bladder Campion) in your garden? What is your experience with this plant? Please share in the comments below!

Do you sell Silene vulgaris (Bladder Campion) seeds or have plants for sale? You can place your advertisement here. Contact us now!