What is Chicory? History And Uses. 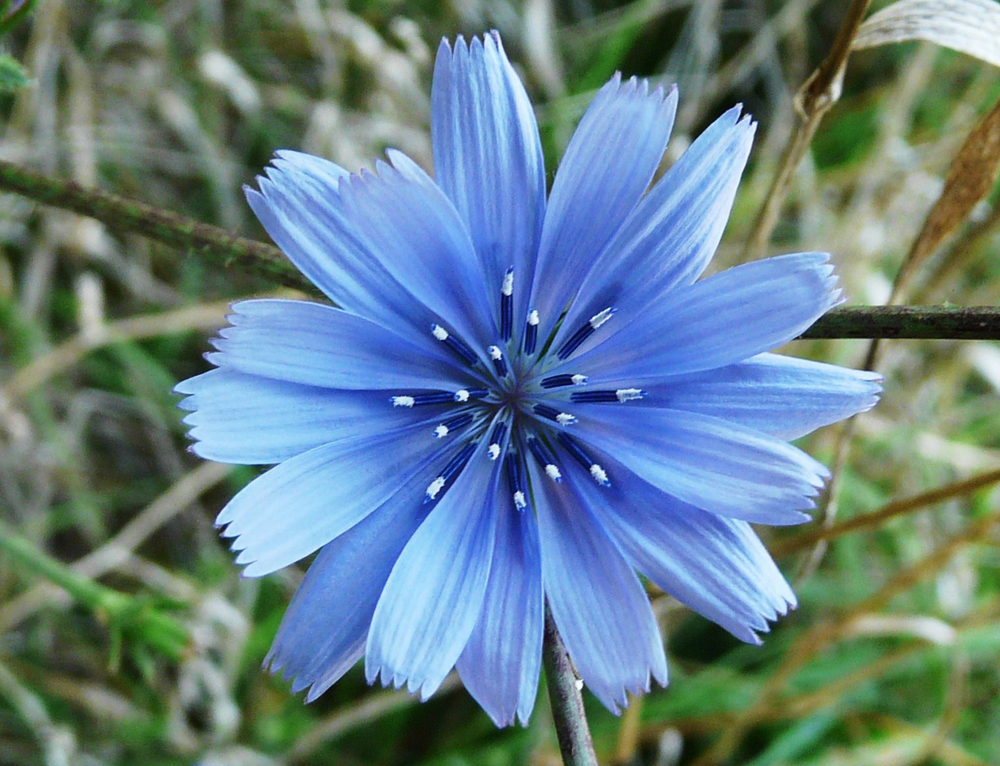 Cichorium intybus, or common Chicory, is a somewhat woody, perennial herbaceous plant usually with bright blue flowers, rarely white or pink. Many varieties are cultivated for salad leaves, chicons (blanched buds), or for roots (var. sativum), which are baked, ground, and used as a coffee substitute and additive. It is also grown as a forage crop for livestock. It is native to Europe and lives as a wild plant on roadsides. Now it is also common in North America and Australia where it has become widely naturalized.

In the United States “Chicory” is also the common name for curly endive (Cichorium endivia), so don’t confuse these two closely related species.

Coffee chicory is grown in many parts of the world, with the largest producers in France and South Africa. The root is grown and harvested much like sugar beets. The roots are pulled from the ground with specialized equipment, cut into small pieces, kiln dried, roasted, ground and packaged.

High concentrations of the carbohydrate inulin are caramelized during roasting and converted into d-fructose (fruit sugar). It also contains between 4 and 6 percent protein and a small quantity of fibre. The caramelized fruit-sugar gives chicory its distinctive dark brown color while increasing sweetness and reducing the bitterness that is characteristic of the raw root.

Roasted chicory contains none of the volatile oils and aromatics that are contained in roasted coffee. It also contains no caffeine. It does however yield 45 to 65% of soluble extractive matter, while coffee yields only 20 to 25%. This difference explains why less coffee and chicory can be brewed while still resulting in a beverage that looks (and tastes) quite strong.

The roots of other subspecies of Chicorium Intybus are used for the production of the ‘forced’, grown in the dark, vegetable known as Belgian or French Endive also known as ‘chicon’ and Witloof chicory.

The root is also used as a ‘feedstock’ for the manufacture of inulin, which is used as sweetening agent for lowfat and reduced calorie foods. The leafy portion of the plant is often used as animal fodder in Europe, while in the U.S. it is generally considered a noxious weed. The blanched (to reduce bitterness) leaves can be used as a salad green. A common meal in Rome, puntarelle, is made with chicory sprouts.

Commercially available coffee chicory is not derived from the root of the endive plant. Endive is the sister species Chicorium Endivia, popularly known as the salad green ‘escarole’ or ‘curly endive’. The root of Chicorium Endivia has undoubtedly been used in the past as a coffee subsitute, but it is not commercially used for that purpose today.

The chicory plant is one of the earliest cited in recorded literature. The word ‘Chicory’ is probably derived from the Egyptian word ‘Ctchorium’, which in various forms has become the name of the plant in practically every European language. Originally used to describe the wild plant, its use over time was extended to the cultivated form as well. The use of the wild foliage as an animal feed probably coincided closely with its first use as human food, which undoubtedly predated recorded history.

Chicory was cultivated as early as 5000 years ago by Egyptians as a medicinal plant. Ancient Greeks and Romans used chicory as a vegetable and in salads. References exist in the writings of Horace, Virgil, Ovid, and Pliny. Galenus gave it the name ‘Friend of the Liver’, because of its supposed stimulating effect on that organ. Cultivation as animal forage in northern Europe began in the early 17th century. The wild root may have been used for food, but it is likely that it was a last resort, since the wild root is woody and incredibly bitter. Cultivated roots, (when young and tender) on the other hand, are consumed to this day, particularly in Belgium. 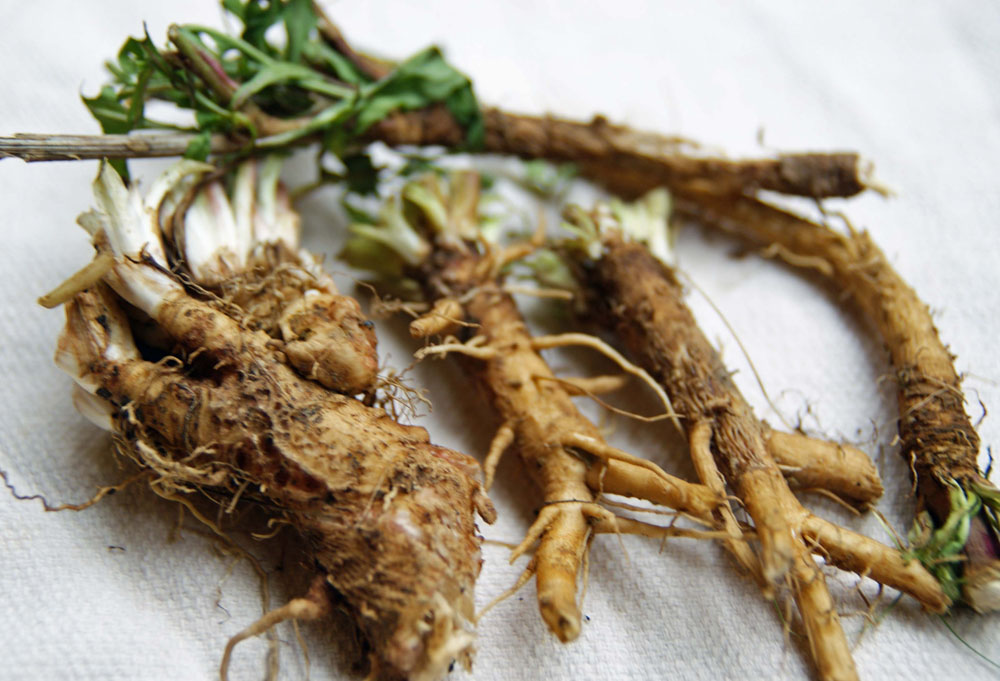 Exactly when the root was first roasted to be used as a coffee substitute is unclear. There are references to the use of wild chicory root as a coffee additive in colonial America. It is known that its use in this form was widespread in France after Napoleon initiated the ‘Continental Blockade’ in 1808, which deprived the French of most of their coffee.

When the blockade was lifted the French continued to use chicory as an additive because they believed it was good for one’s health and improved the flavor of coffee. In the 19th century its use as a coffee additive and substitute became widespread in France and areas of French cultural influence like Louisiana. Chicory use grew with the advent of the Civil war. As trade disruptions and blockades disrupted deliveries of coffee, citizens and soldiers made do by roasting wild chicory root, as well as many other ingenuous substitutes like corn and groundnuts.

But this was a substitution of necessity, not choice, so when the war ended, chicory use decreased as prosperity improved and coffee became more readily available. Except in New Orleans and parts of Louisiana where its use was a matter of preference not necessity. Of course, chicory use, as an economical additive in coffee is widespread throughout the world.

Basic chicory coffee recipe: use about 2/3 ground coffee and 1/3 chicory, and brew as you normally would (such as in a drop coffee maker or a French press). 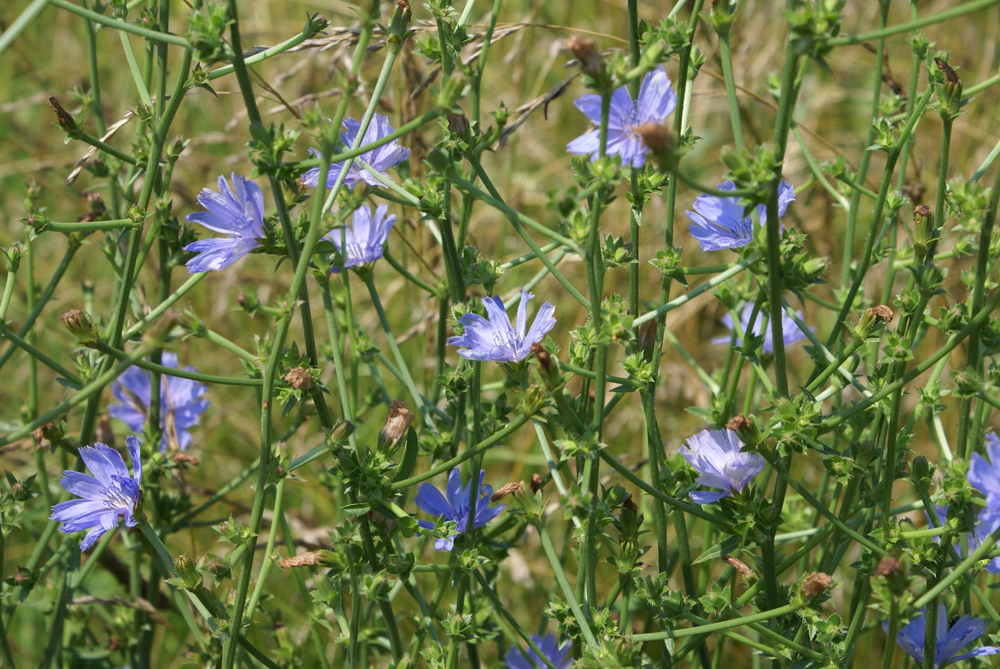 Chicory has been thought to have medicinal qualities for over 5000 years. Ancient Egyptians, Greeks and Romans used it as a liver tonic, sedative and appetite stimulant.

Early 19th century French chefs and writers believed chicory to be a ‘contra-stimulante’, that is, the sedative effects were a perfect compliment to the stimulating effects of the caffeine in coffee. On the other hand they believed its use by ‘bloodless’ or ‘lymphatic’ persons should be avoided.

The fresh root has been said to be useful against pulmonary consumption. A decoction of 1 oz of root to a pint of boiling water has been found to be effective against jaundice and liver enlargement.

Syrup of chicory is said to be an excellent laxative for children since it works without irritation.
Ancient herbalists considered the bruised leaves to make a good poultice for swelling and inflamed eyes.

A recent Korean study indicates that that chicory reduces cholesterol levels and increases the ratio of HDL (the good stuff) to LDL (the bad stuff) in the blood of tested animals.

A Belgian study showed chicory ingredients are also helpful in preventing osteoporosis as shown in humans, while so far they have been tested in animals with beneficial results “in the prevention and inhibition of colon and breast cancer”.

It also contains vitamin C, a powerful antioxidant, and other nutrients like minerals, potassium, iron, calcium and phosphorus. Chicory (especially the flower), used as a folk medicine in Germany, is recorded in many books as an ancient German treatment for everyday ailments. It is variously used as a tonic and as a treatment for gallstones, gastro-enteritis, sinus problems and cuts and bruises. (Howard M. 1987).

Inulin is a soluble fiber and fructo-oligosaccharide (FOS) that functions as a prebiotic to promote digestive health by stimulating beneficial bacteria in the gut.

The herb is helpful in treating an enlarged liver and protects against alcohol-induced hepatic damage.
Due to the presence of compounds that are central nervous system stimulants, Chicory is used to treat nervous disorders such as anxiety. The herb is known to lower blood sugar levels.

Chicory is well known for its toxicity to internal parasites.