Any idea what this plant is? 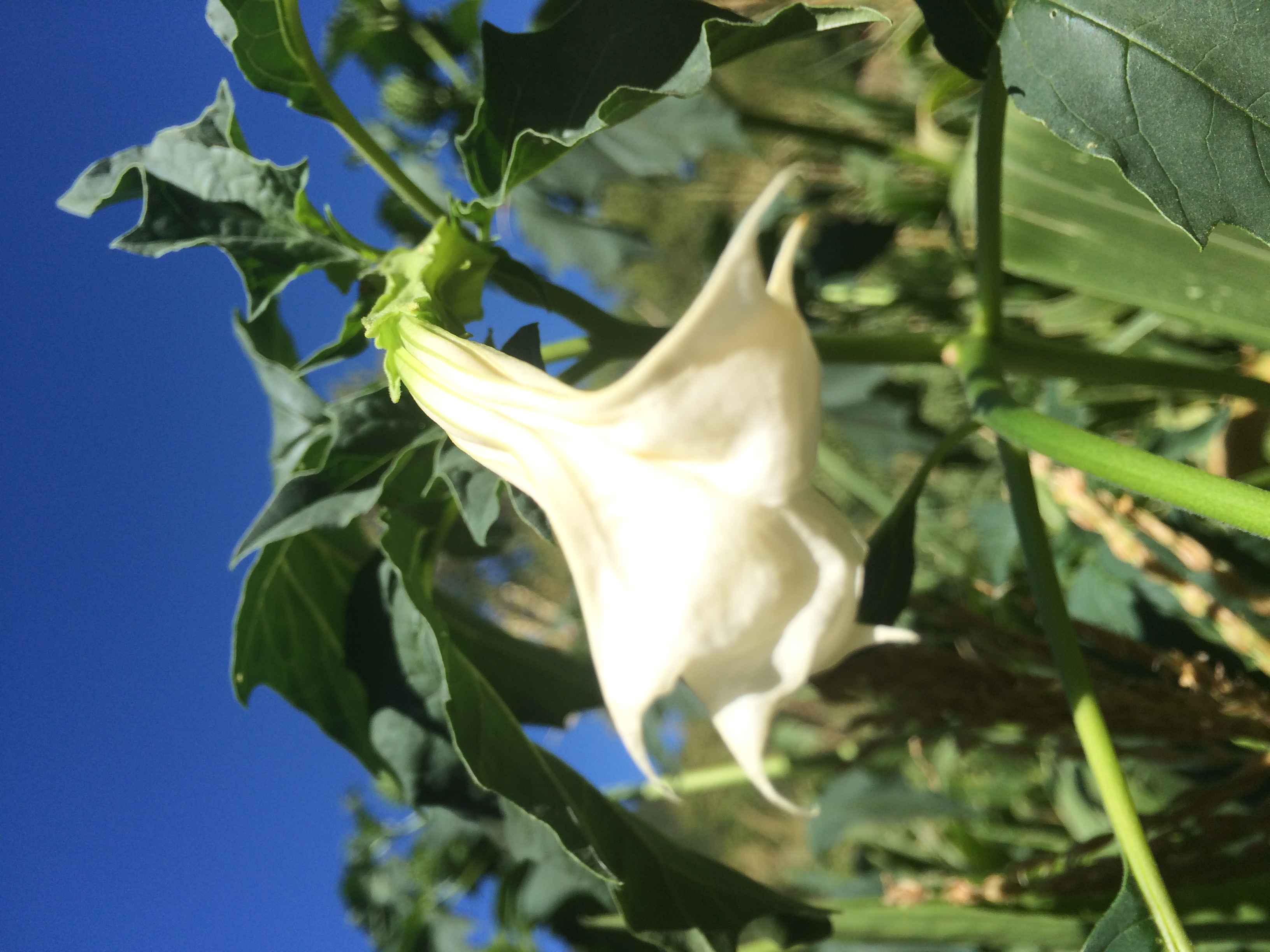 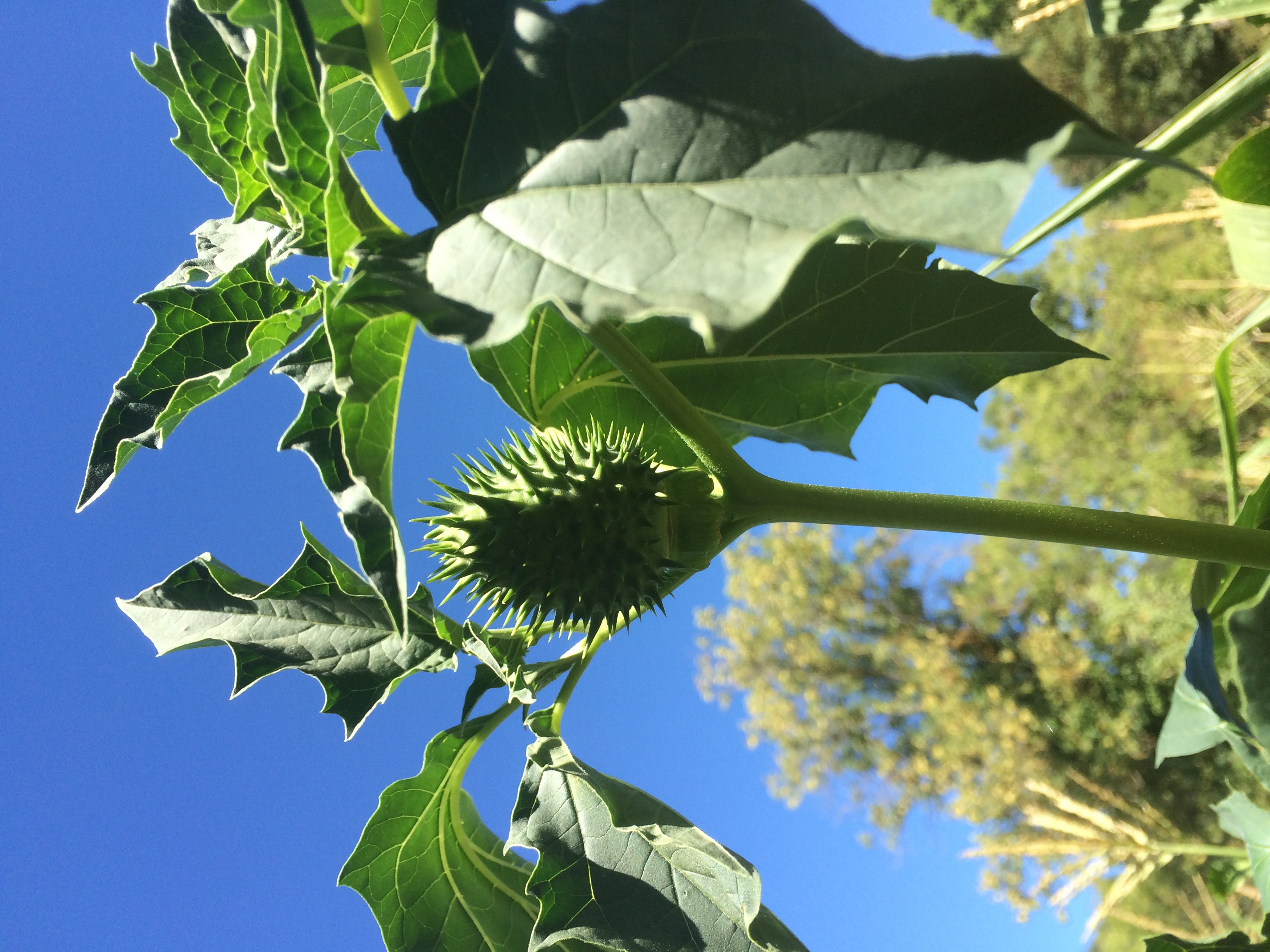 and it’s fruit. It’s about 2meters high (6ft). Is it poisonous, edible, medicinal? We are very curious as to what it can be, it surprised us growing in the middle of our corn!

It looks like Datura stramonium. This plant has many names 🙂 It is known by the common names Jimson weed or Devil’s snare. Other common names for Datura stramonium include thornapple and moon flower. Other names for the plant include hell’s bells, devil’s trumpet, devil’s weed, tolguacha, Jamestown weed, stinkweed, locoweed, pricklyburr, and devil’s cucumber.

Datura has been used in traditional medicine to relieve asthma symptoms and as an analgesic during surgery or bonesetting. But I wouldn’t recommend to eat it and use this plant as it is also a powerful hallucinogen and deliriant. Sometimes it is used spiritually for the intense visions it produces. However, the tropane alkaloids responsible for both the medicinal and hallucinogenic properties are fatally toxic in only slightly higher amounts than the medicinal dosage, and careless use often results in hospitalizations and deaths. All parts of Datura plants contain dangerous levels of the tropane alkaloids atropine, hyoscyamine, and scopolamine, which are classified as deliriants, or anticholinergics.

Whoa! Alright, I’ve heard some stories about datura and will definitely stay clear from any usage. Thanks for all the info!

I’ve read that in traditional Ayurvedic medicine in India, datura has long been used to help with asthma symptoms. The active agent is atropine.

Also, the Datura stramonium leaves are generally smoked either in a cigarette or a pipe. But I wouldn’t advise it 🙂 Actually, the name “datura” has its roots in ancient India, where the plant is considered particularly sacred.

Chinese used the plant as a form of anaesthesia during surgery.

Here is an interesting story about Datura stramonium:

In the United States, the plant is called jimson weed, or more rarely Jamestown weed; it got this name from the town of Jamestown, Virginia, where British soldiers consumed it while attempting to suppress Bacon’s Rebellion. They spent 11 days in altered mental states:

The James-Town Weed (which resembles the Thorny Apple of Peru, and I take to be the plant so call’d) is supposed to be one of the greatest coolers in the world. This being an early plant, was gather’d very young for a boil’d salad, by some of the soldiers sent thither to quell the rebellion of Bacon (1676); and some of them ate plentifully of it, the effect of which was a very pleasant comedy, for they turned natural fools upon it for several days: one would blow up a feather in the air; another would dart straws at it with much fury; and another, stark naked, was sitting up in a corner like a monkey, grinning and making mows [grimaces] at them; a fourth would fondly kiss and paw his companions, and sneer in their faces with a countenance more antic than any in a Dutch droll.

In this frantic condition they were confined, lest they should, in their folly, destroy themselves — though it was observed that all their actions were full of innocence and good nature. Indeed, they were not very cleanly; for they would have wallowed in their own excrements, if they had not been prevented. A thousand such simple tricks they played, and after eleven days returned themselves again, not remembering anything that had passed.

– The History and Present State of Virginia, 1705

Hahaha well atleast they returned to themselves in the end