The Manchineel Tree Is The Most Poisonous Tree in the World 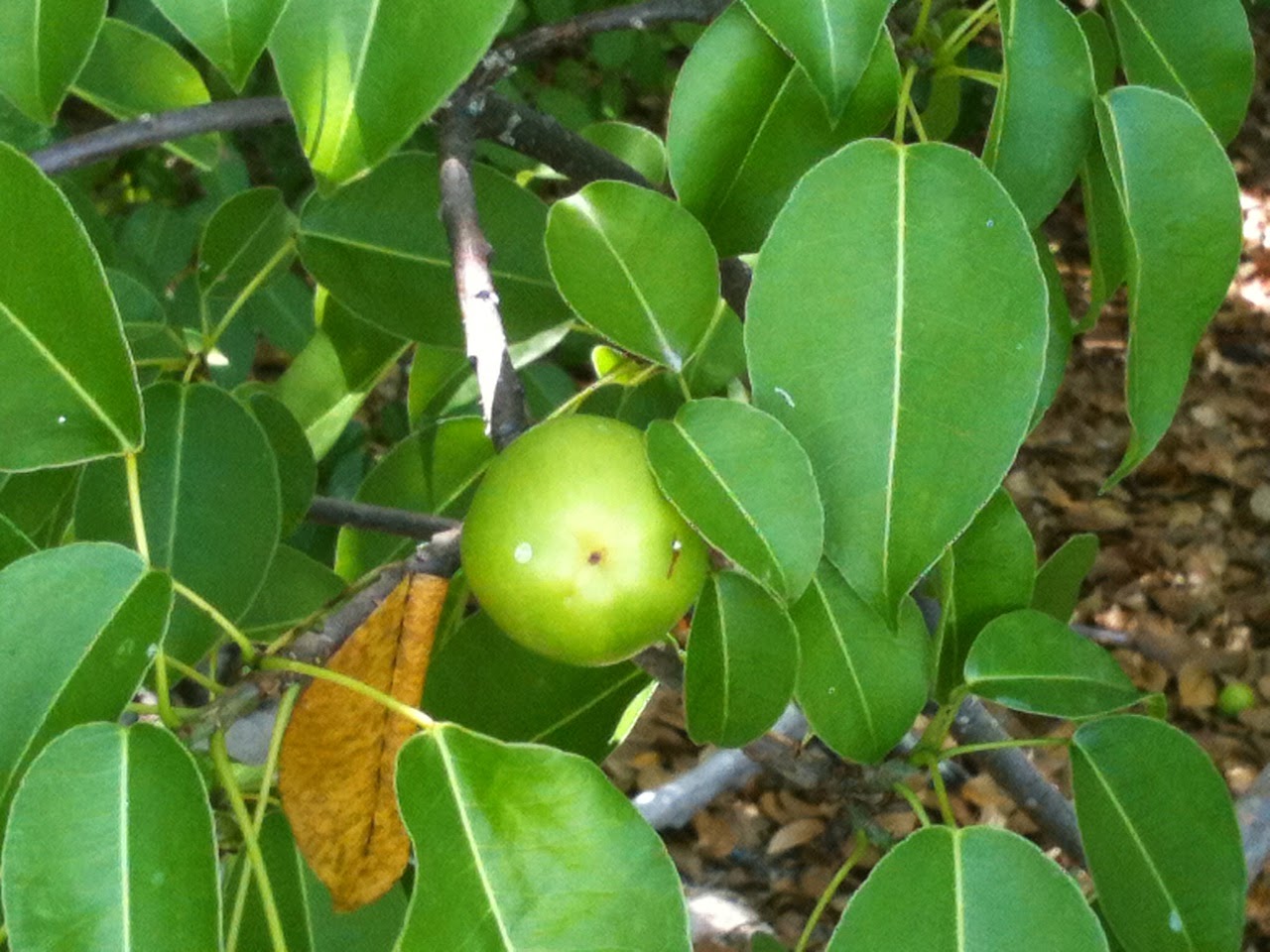 The Manchineel tree, Hippomane mancinella, is a species of flowering plant in the spurge family (Euphorbiaceae). It is native to tropical southern North America and northern South America, and is known as the most poisonous tree in the world. In places where it grows – Florida, the Caribbean and the Bahamas – the manchineel is often marked with a red band to warn passersby not to get too near it. 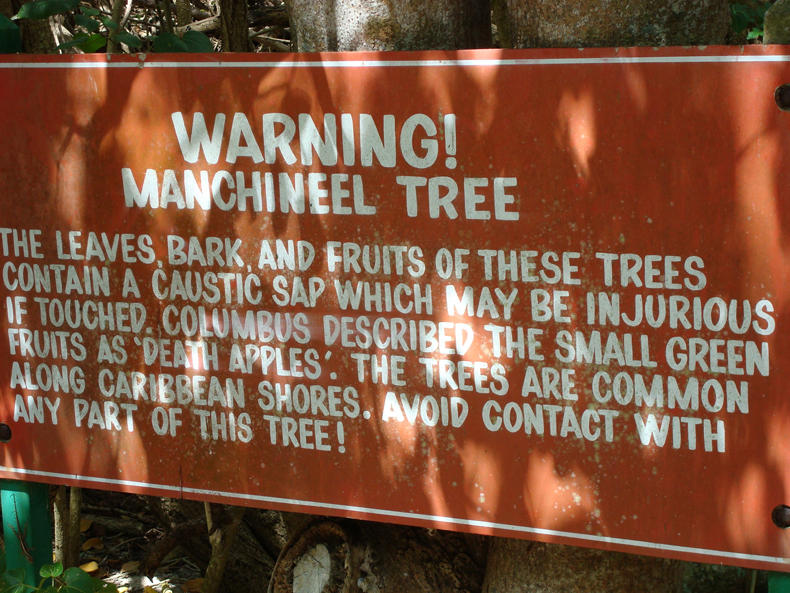 The tree is poisonous in so many ways that if you ever spot one, it is better you stay at least a few yards away from it. Its fruit resembles a small apple, but eating one could land you right in the emergency room. The name “manchineel” (sometimes written “manchioneel”) as well as the specific epithet mancinella is from Spanish manzanilla (“little apple”), from the superficial resemblance of its fruit and leaves to those of an apple tree. A present-day Spanish name is in fact manzanilla de la muerte, “little apple of death”.

The manchineel’s milky white sap is incredibly caustic and poisonous as well – even a drop could cause skin blisters, dermatitis, swelling or burns. This happens a lot with unsuspecting travelers who use the tree for shelter from the rains. The sap is so caustic that even the rain drops coming from the branches can cause burns. The bark is poisonous too – burning it releases a smoke that causes temporary (and in some cases, permanent) blindness. Considering all the ways it can hurt you, it’s no wonder the manchineel currently holds the Guinness record for world’s most dangerous and poisonous tree. 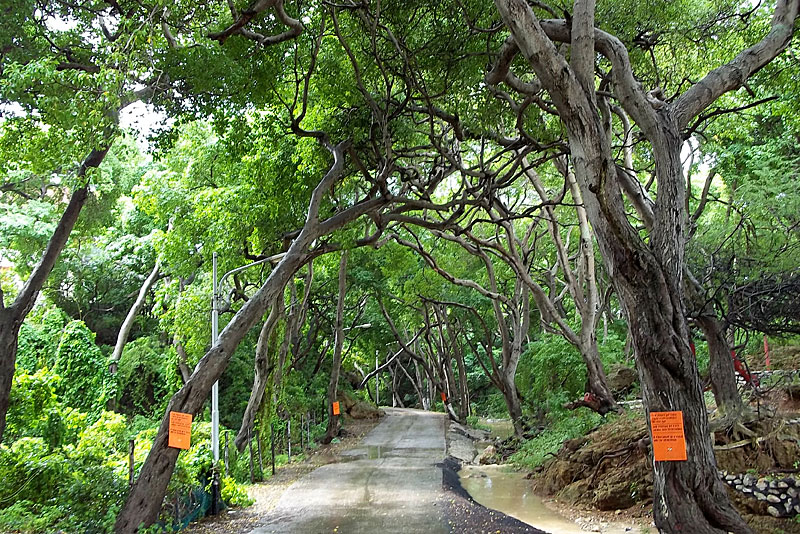 Legend has it that one of the most infamous deaths by manchineel poison was of Spanish conquistador Juan Ponce de Leon. He returned to Florida in 1521 in search of gold and to lay claim to the area he thought he had discovered. Of course, the natives weren’t exactly going to hand over their land to him. In the struggle that took place, an arrow laced with manchineel sap struck Ponce de Leon’s leg, leading to his long drawn out death.

The Carib Indians used the sap of this tree to poison their arrows and would tie captives to the trunk of the tree, ensuring a slow and painful death. Also, the Caribs were known to poison the water supply of their enemies with the manchineel leaves.

Nicola H Strickland, a consultant radiologist, published an article in the British Medical Journal about how she ate manchineel apples during a holiday to the Caribbean island of Tobago. “While searching for exotic shells and coral fragments, I saw some green fruits among the scattered coconuts and mangoes lying on the beach,” she wrote. “They were round, the size of a tangerine, and had apparently fallen from a large tree with a silvery bole and oblique based leaves.” 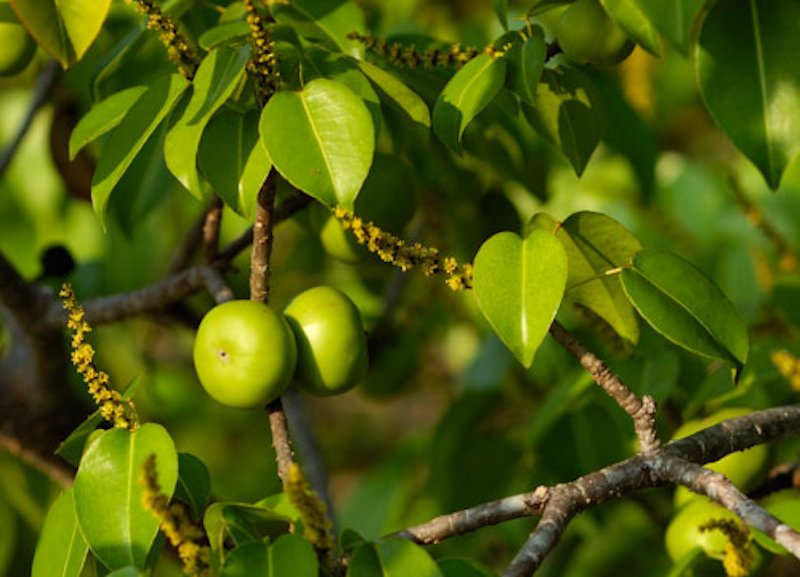 “I rashly took a bite from this fruit and found it pleasantly sweet. My friend also partook (at my suggestion). Moments later we noticed a strange peppery feeling in our mouths, which gradually progressed to a burning, tearing sensation and tightness of the throat.”

Nicola wrote that the symptoms had worsened over the next two hours, and they couldn’t swallow any food because of the excruciating pain in their throats. Milk was the only thing they found somewhat soothing. It took eight hours for all the symptoms to slowly subside.

Manchineel trees have shiny green, oval leaves and can grow over 50 feet tall. They apparently lure people into a trap – providing shade and fruit that tastes sweet at first but later has devastating effects. Fortunately, injuries have been rare thanks to the warning signs about the tree’s dangers.