American Strawberry Bush Or The Bursting-Heart 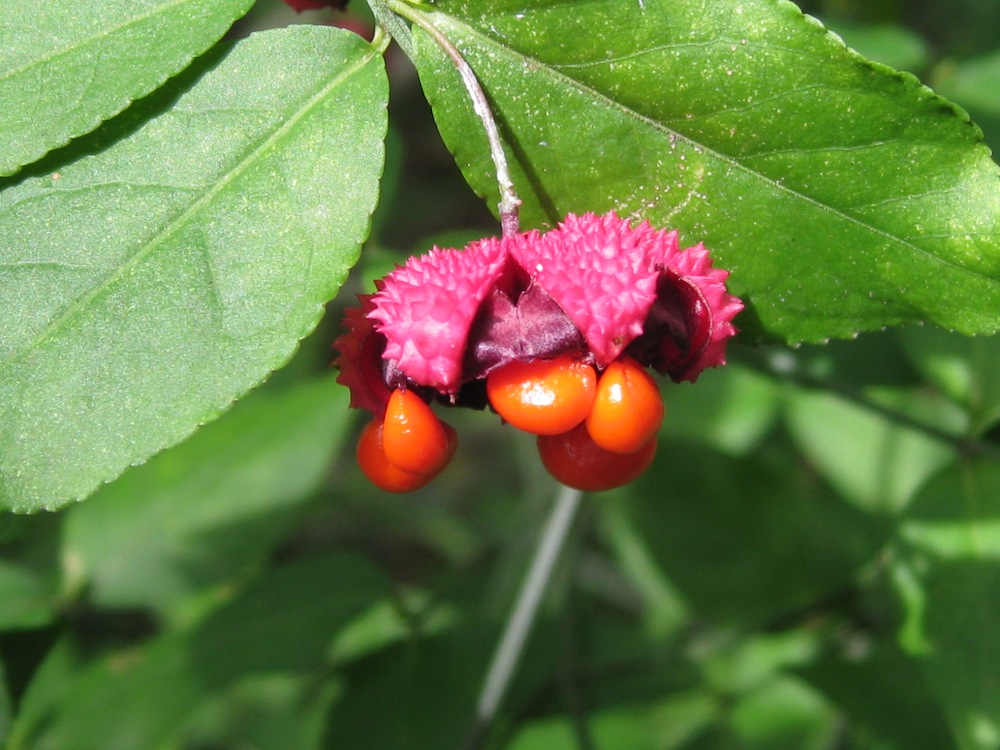 Euonymus americanus is a species of flowering plant in the family Celastraceae.
Common names include strawberry bush, American strawberry bush, bursting-heart, and hearts-bustin’-with-love. It’s so named for the plant’s unique four-lobed seed capsules, which open in September and early October to reveal a fiery-red collection of dangling seeds from its interior. These seeds can persist late into the year and add splashes of red to the late-season landscape. Though attractive up close, they’re really too small to be effective from a distance. Hearts-a-Bustin is native to the eastern United States – New York to Florida, west to Texas and Illinois.

Euonymus americanus is a sprawling, multi-stemmed shrub that grows from 4 feet to 6 feet high. With time, the plant becomes more erect and stems become thicker and more heavily branched. Strawberry bush is a shade-loving plant. It’ll grow in full shade or part sun, but afternoon sun should be avoided. If it is planted in a sunnier spot, it requires more water. The shrub does best in areas with some summertime moisture. In fact, strawberry bush is often found in the wild alongside streams where it will freely reseed with enough moisture. It prefers slightly acidic soils.

In late spring Hearts-a-Bustin opens its greenish-white blossoms tinged with pink or purple. These little five-petaled flowers are so flat they’re almost two-dimensional, and they often form on thin paired stalks.

Later in summer flowers start forming a warty, globular fruit. This capsule resembles a strawberry – hence the shrub’s common name, but by late August it begins to swell and take on a hue more reminiscent of raspberries. Then, in late September, the husk flies open to reveal up to five brilliant, shiny, scarlet berries, each dangling by a thread. 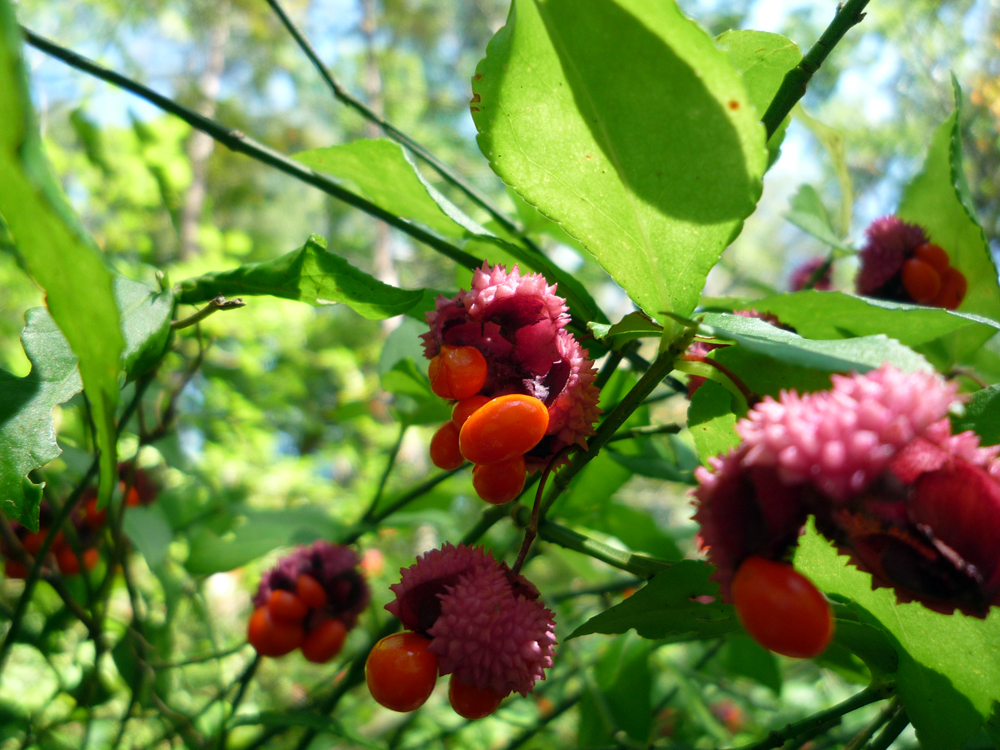 Strawberry bush was noticed by early botanists who visited the New World, and in 1663 it was among the first American plants exported back to Europe for horticultural use.

Deer have been known to graze on this plant and seem to love the tender leaves and stems, but the leaves and twigs are considered to be deadly poisonous to domestic sheep and cattle. But it seems the fruits have no effect on Wood Thrushes, Wild Turkeys, Eastern Bluebirds, Yellow-Rumped Warblers, as well as Northern Mockingbirds, which consume berries and disseminate the seeds.

Humans should take the red color of the seeds as a warning; they are known to be a strong laxative and cause severe diarrhea. In fact, this genus of plants in general is considered poisonous to humans. When ingested the berries may also affect the heart, possibly causing cardiac arrest, and are especially dangerous for kids. In the words of one herbalist, all parts of the plant are “nauseous, emetic, and purgative”.

Regardless, Native Americans used the roots of Strawberry-bush to make a tea for stomach and urinary problems and uterine prolapse, vomiting of blood, painful urination and stomach aches. The bark is diuretic, expectorant, laxative and tonic. It was used as a tea in the treatment of malaria, liver congestion, and constipation. The powdered bark, applied to the scalp, was believed to eliminate dandruff. An infusion of the plant has been used to stimulate menstruation and so should not be used by pregnant women.